Travel creates the most amazing life memories and often these start at the airport with security checks, the wait, and the thrill of the holiday ahead. Can airport retailers become part of these treasured memories?
Swiss premium chocolatier, Lindt & Sprüngli, discovered that a simple Lindt-branded selfie photo can actually achieve this. 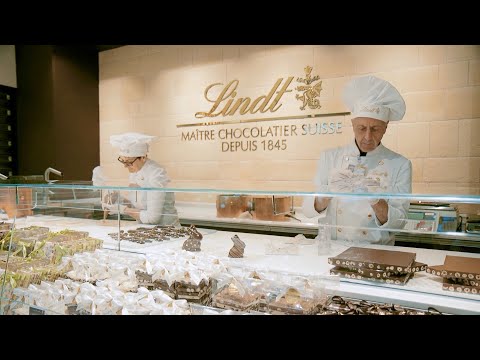 The company wanted to create a memorable experience for shoppers at its Lindt Boutique store in Zurich airport. A chocolate giant could hand out free samples but Lindt wanted to create a lasting memory that makes customers want to return to the store on their next trip.

Lindt & Sprüngli turned to Ombori, a tech startup that’s carving out new digital experiences in bricks-and-mortar stores, for a solution.

To help Lindt spark up a conversation with customers, Ombori customized its Magic Mirror retail solution — a voice-enabled interactive mirror that’s now transforming the airport retail experience from Switzerland to China and Singapore.

Ombori’s Magic Mirror has been deployed at H&M’s flagship store in New York City to enhance the fashion shopping experience, using face detection to recognize when a person is looking at the screen. An interactive voice-assistant then walks the customer through steps to take a selfie photo from the Magic Mirror and outputs their face on a digital cover of an H&M-branded magazine.

Ombori customized the Magic Mirror to let customers create the perfect Lindt-branded postcard, which can be shared digitally on social media. A unique add-on for airport retail is that Lindt’s Magic Mirror can also print high-quality, glossy postcard-sized copies of the selfie for the traveler to take with them.

Lindt now has five Ombori Magic Mirror airport retail units that are rotated between airports in different countries, as well as the permanent installation at Zurich airport.


Ombori partnered with Microsoft to use its Azure IOT Edge for rapid on-machine face detection. It also delivered to Lindt a unique feature that made airport retail an exceptional experience by using artificial intelligence (AI) to swap out the physical background at the airport for an exotic holiday destination. Lindt can configure the terminals to display several scenes based on the location of the airport they’re installed at. The Ombori-developed AI feature is powered by Microsoft Azure Cognitive Services.

The feature also allowed Lindt to boost the value of its sponsorship of Swiss tennis great, Roger Federer, whom it hired as a brand ambassador. Now customers can create a postcard where they’re standing alongside the sporting hero.

The international deployment of the five units also required language versatility since the screens are moved between English-speaking locations to China and across Asia.

“To support all different locations we had to add support for many different languages,” says Ombori CEO Andreas Hassellof.

“We’ve done this before, but it was the first voice interface we did in Chinese and we had to tweak it to work both with mainland Chinese and the Singaporean dialect.”