Last week, my colleague Ross talked about the touch-screen installation we recently built for Whyred, and hinted about some upcoming developments in the UI. Well, things move fast at Ombori, so we've already designed and implemented a second installation for the Whyred store in Stockholm. As it happens, the touch screen is taking a while to install, so this product is actually live even though the first one is still in production. Here's how we added a whole new way to control an in-store screen using the customer's phone.

We wanted to get away from the whole concept of touch as an interface and create something a little more innovative that encourages shoppers to get their phones out and interact in a new and exciting way.

In its idle mode, the screen still displays a traditional marketing video. But now, instead of inviting the customer to touch the screen, there's a QR code which they can scan. If they have an iPhone, this is a simple process: they don't have to download anything to activate the screen, it just works. 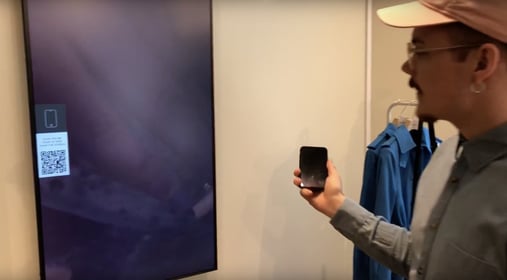 Scanning the QR code opens up a Web page on their phone which asks them what they want to see. Here we simply offer them the choice between men's and women's fashion. 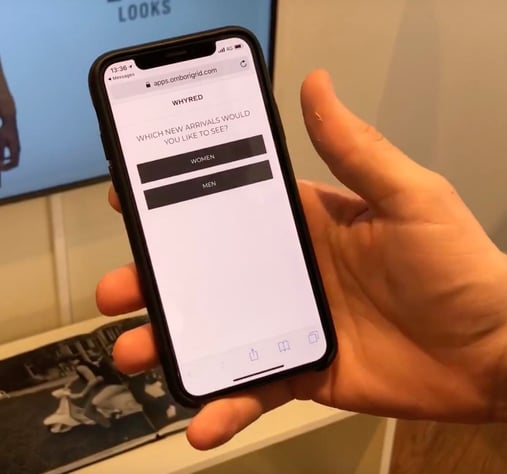 Whatever they choose is then displayed on the screen. If they like what they see, they find out more via the Web site on their mobile device, and either make a purchase in-store or come back later and place an online order. 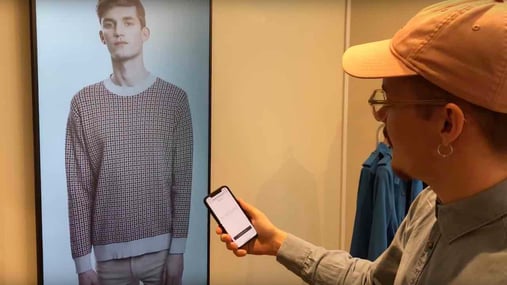 But that's not all. The feature we're most excited by is the way you navigate through items on the screen. Instead of tapping or swiping on the screen, all the user has to do is flick their phone left or right to swipe between items. We use the phone's inbuilt accelerometer to detect the gesture, and the screen responds almost instantaneously. It's a really neat way of interacting with the content, and once you do it the first time, it feels completely natural.

It's all about the UI

Mobile devices offer so many ways to interact with content, both directly on the phone itself and via linked devices. Most retailers are taking advantage of a mere fraction of what's possible. It doesn't have to be just tapping on a screen - we can do so much more. The accelerometer is rarely used, which is why we decided to see if we could create a unique UI that had elements of a game but would also work for shopping.

Obviously, this isn't an ideal way to scroll through large amounts of data, but for this project, it was ideal. Whyred wanted to use the screen to highlight specific items they wanted to promote, so we didn't need to worry about navigating their whole range. For these purposes, the flick gesture was perfect.

Coming up with an innovative UI isn't just a gimmick. It will get customers interested and get them talking about you.

It's a great differentiator in a highly competitive market - something Amazon and other online vendors can't offer. And let's not underestimate how important it is to generate a sense of fun, turning a simple purchase into an entertaining experience. That's something that more and more customers are looking for. When it comes to discretionary spending, they expect shopping to be a leisure activity, and offering them something to play with is a great incentive to come into your store.

Another huge advantage of this is that the screen can be placed in a window, and it can be controlled from outside the store, effectively expanding the store's reach. It's available 24/7, unlike an in-store touch-screen, which requires the store to be open. And during opening hours, it attracta casual passers-by and createa an exciting interaction on the street, encouraging customers to come in and look around.

One final benefit is that unlike the touch-screen, this installation doesn't take any extra hardware, so Whyred were able to get it up and running much faster and with no additional cost. That's a massive plus for businesses who want to get something going quickly while minimizing their risk and investment.

We're already working on developing new UI elements for retail environments, and I'm looking forward to telling you more about them soon. 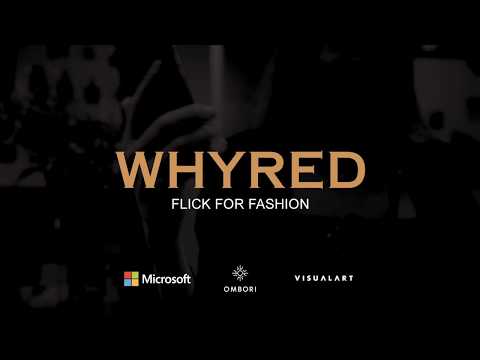 Getting the Fundamentals Right for Unified Commerce

Benefits of Having an Interactive Kiosk in Your Store