Amazon and the rural economy 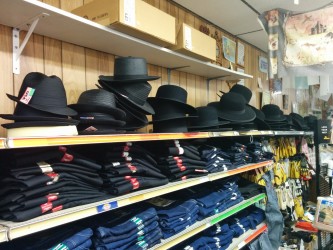 You probably haven’t heard of LaBelle, Missouri. That’s okay, there’s no reason you should have. It’s a small town of just a couple of hundred people, most of whom are farmers.

In the middle of the town, there’s a crossroads with two churches, a small bar that also serves food, an abandoned newspaper office and bicycle repair shop, and a gas station that doubles as a local store, selling milk, bread, cigarettes, beer, motor oil, and other essentials. There are a few more stores in the nearby towns, run by the local Amish community: you can buy meat, vegetables, and even clothes and shoes - as long as you don’t mind wearing a black suit with a white shirt, or a dress that looks like something your great-great grandmother might have worn. For anything else you need, you have to drive almost an hour to either Quincy or Macon.

In many ways, LaBelle is no different to a thousand other towns in the American mid-West, or even the small villages in the rural parts of Europe or other parts of the world. 15% of Americans - some 46 million people - live in small towns like LaBelle. These are small, tight-knit communities, where everybody knows everyone else, and families often stay in the same street or home for generations.

Technology hasn’t been the blessing for these villages that it has for the city dwellers. They’re unimpressed by the ability to order a cappuccino via a mobile app or check out the nightlife on their phone when the nearest place to buy a coffee or see a gig is 40 miles away. Internet speeds are comparable to what the rest of us had in the 90s. Through both booms and recessions, they’ve seen local stores and factories closing, jobs going, and prosperity dwindling. It’s no surprise that places like LaBelle voted overwhelmingly for Donald Trump last November.

The decline of these small towns is nothing new. For decades, the people of LaBelle would get together every week or two in small groups, and take a day trip into Quincy. They’d buy all their groceries, take a leisurely wander through the shopping malls browsing the stores, stop off in a cafe for a coffee and a sandwich, and maybe go to a restaurant or a movie before driving home. It wasn’t just a shopping trip: it was a social occasion, and a much appreciated chance to buy a few treats for the family. Small cities like Quincy, with just 40,000 inhabitants, or Macon with a mere 3,000, depended on the regular influx of rural trade from towns like LaBelle. It was a mutual interdependence that worked well.

The restaurants, the diners, the malls, and the cinemas of Quincy and Macon now stand mostly empty. There’s not enough local trade in town to keep them busy. And if Amazon Pantry ever comes to Missouri, even the supermarkets may well struggle to survive. Already hard hit by the loss of manufacturing jobs, the widespread loss of retail jobs in those small towns and cities will be devastating.

The future looks bleak for small rural businesses. For years, they’ve had a captive market, but they can no longer rely on customers coming to them, and they’re now fighting against vendors from all over the world. If they are to keep going, they have to find a way to compete with Amazon’s low prices, immense inventory and fast delivery.

This means focusing on what they do best - building up personal relationships with customers and rewarding their loyalty. That doesn’t mean rejecting modern retail technology. It means finding ways to make it work for local customers. Local stores can easily offer next-day or even same-day delivery, for example: Amazon sometimes struggles to match that outside the big cities. Highly personalized marketing campaigns via text, push, or email can help out-of-town customers feel welcomed and cared for: give customers that sense of community that’s lacking from Amazon. Partnerships and location-based marketing can drive referrals: you just visited the feed store, so here’s a coupon for a free Danish at the nearby diner, valid for today only.