Amazon Go and the future of retail 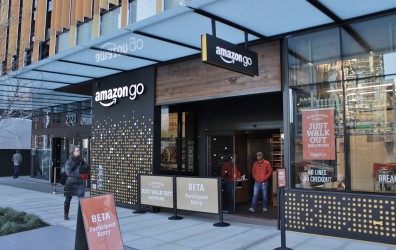 It’s that time of year again. Black Friday’s over, Christmas is coming, and Amazon makes an announcement designed to terrify retailers into believing that they might as well all give up and go home. This year, they announced Amazon Go, a fully automated grocery store with no human checkout operators. You just put what you want in your bag, a smart system tracks what you buy, and when you leave, the payment is made automatically via an app. Couldn't be simpler, right?

On the face of it, it sounds like a win/win. For the customers, it means no waiting in line, and hassle-free payments. It’s literally just grab and go. For Amazon, it means fewer staff and reduced costs, which means they can lower prices and grab market share from traditional grocery stores while maintaining a healthy profit margin. The only losers will be, well, everyone else in the retail business. And that’s just the way Amazon likes it. They’re happy to replace human staff with machines or AIs, and their attitude to commercial competition is to crush everyone else by offering more stuff, cheaper, with less hassle. Even if you’re not in the grocery business, you should be taking careful note of this, because if it works for groceries, then you can bet that the same system will work for everything else as well - or at least anything small enough to carry out of the store with you. Greeting cards, clothes, auto parts, home decor, over the counter medicines, and - since we are, after all, talking about Amazon - books.

They’re happy to replace human staff with machines or AIs ... To put this in perspective, the National Retail Foundation claims that the retail sector in the US supports 25 per cent of the entire workforce.

To put this in perspective, the National Retail Foundation claims that the retail sector in the US supports 25 per cent of the entire workforce. 11 per cent of American workers are cashiers, checkout operators, or sales assistants, according The Workforce Strategies Initiative at the Aspen Institute. Replacing those jobs with smart stores would have a calamitous effect on the entire US economy. 84 per cent of these people are women and 69 per cent are part-time staff who are often providing a secondary income for their families: losing that small job would severely impact their ability to meet basic living standards.

Meanwhile, Amazon continues to grow its online business, while Wal-Mart is closing stores. Small independent retailers are forced to sign up as Amazon vendors because it’s the only way to get noticed. Then they’re in a ruthless price-cutting war where they have to operate on razor-thin profit margins in competition with other similar vendors all over the world. Amazon doesn’t care if those individual retailers survive or not: as long as customers keep coming through their portal, they keep making money. Amazon already dominates the online space: with Amazon Go, they’re directly challenging bricks and mortar retailers on their own turf.

Amazon doesn’t care if those individual retailers survive or not: as long as customers keep coming through their portal, they make money.

A lot of commentators have already dismissed this as another Amazon publicity stunt. After all, there’s a huge gulf between Amazon announcing a project and actually making it happen. They announced Amazon Prime Air in December 2013, three years ago, but it wasn’t until December 2016 that they actually made their first drone delivery. They’re still grappling with technical and legislative hurdles in both the US and the UK. So the announcement of Amazon Go doesn’t mean it’s actually going to happen any time soon. In reality, they’re currently talking about opening a single drive-through pickup location in Seattle sometime next year. It won’t even have the much hyped grab-and-go technology: that’s still very much in testing, and currently confined to a single employee-only Amazon location.

Amazon Go relies on those circumstances where either the customer wants to physically touch the goods before purchasing them, or where they need something literally right away

Aside from the technical issues, although this is a cool idea in some respects, it’s not entirely clear where the niche for this is. For many items, Amazon already offer same-day delivery, especially in the Seattle area. If that’s not fast enough, they’re promising to offer delivery within an hour or two for more and more customers. Amazon Pantry already supplies cheap groceries on demand.

So why would an Amazon customer bother going to a grocery store? Most of the time, it’s far easier to have everything delivered.

Amazon Go relies on those circumstances where either the customer wants to physically touch the goods before purchasing them, or where they need something literally right away: stopping in to grab something for dinner on your way home, or picking up a pint of milk or a loaf of bread. If you only need a few items, you don’t want to be waiting in line behind someone doing the weekly shopping for a family of six. But that’s not really a sustainable niche: they almost literally seem to be cherry-picking the lowest spenders rather than the regular high-volume shoppers.

So commercially, it probably doesn’t make sense, even allowing for the cost savings.

The true impact of Amazon Go

But if you're thinking in those terms, you're missing the true impact of what Amazon Go is really doing, in in terms of the technical, commercial, and social aspects. Amazon are using Go to pioneer and test systems that could one day be used by retailers across the world.

Over the next few years, they’ll be using their test sites to work out the bugs, improving the hardware and training the AIs. Their massive publicity machine will be educating customers, getting them used to mobile payments. They’ll be streamlining the processes for automated shelf stacking and system optimisation. They’ll be gathering data on exactly where cost savings can be made, and they’ll be able to quantify the financial value of getting rid of checkouts and other human staff. And then, four or five years from now, they’ll be in a position to license that technology to everyone else. They don’t actually need to operate a chain of Amazon stores. They only need to be in a position to provide the infrastructure that powers everyone else’s store and take a slice of the transaction processing fees.

Amazon are pioneering systems that could one day be used by retailers across the world. ... They’re aiming for a de facto monopoly on in-store automation.

That’s the long game that Amazon are playing. They’re aiming for a de facto monopoly on in-store automation. That should be a huge wake-up call for the entire retail industry. Now is the time to invest in next-generation retail technology, either by creating third party alternatives or developing in-house solutions. Business as usual isn’t a viable long-term strategy.

A modified version of this article was originally published by IT Pro Portal.